Book by A.V.Ilango and Srivi Kalyan has evolved into its current form over five years.

The idea originally evolved through a series of forty three lectures that A.V.Ilango gave to his students over a period of six months. These talks were recorded and collected into a crisp forty five pages. After about a year and a half, Srivi joined the project and started working on the book with Mr. Ilango. Over two and half years of weekly conversations, sometimes daily conversations, the book evolved to its current form.  While the original idea was to re-craft and edit his lectures, the meandering conversations opened up several newer possibilities with rich implications. The original concept looked primarily at working with space, line and form and had examples that spanned across both eastern and western art. This was completely reorganized in the subsequent work we did together. While most of the original content remains in the book, from those 45 pages it has expanded into a good 300 pages of both art and text. In this process, I was keen that the book have original illustrations that would illustrate the concepts elaborated in the book. Eventually Ilango's and my works were primarily used for illustrating along with some works by Sandhiya Kalyanasundaram,  Kishore Sahoo and Saraswathi Kalyanasundaram. 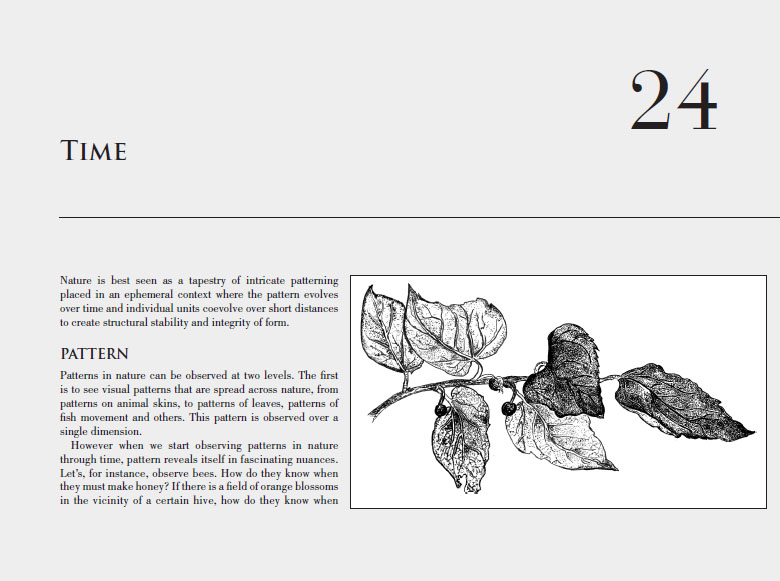 To continue the conversations about the book - http://www.fooniferse.com/voices/coming-home-earth-space-line-form

To watch the Bangalore Launch of the book on  23rd August, 2015 - https://www.youtube.com/watch?v=EJV1mXnpdrk

What is “eastern” in a global world? What are its political, intellectual, religious, social, and cultural contexts? How do we define a finished work of art as inherently eastern or western? How does the nature of practice and perception add to the conversation around the geographical, cultural context of a work of art? Can a realistic portrait or a symbolic painting tell us the origin of its thought or form in its visual presence? How do we dig deeper into our roots, while our portrayals are modern?

What are roots if they are driven by layers of landscapes, history, conflict, struggle, glory, mystical meanings? What if they are intertwined with interdisciplinary pathways, lost tracts of human evolution, forgotten practices, intuitive directions and unexpected truths that breathe in through our subtle beings? What are roots if they are enshrouded in languages at once colonial, global, modern, ancient, tribal, folk or classical; At once repressed, freed, politicized, ostracized, provoked, enshrined, revolutionized or misinterpreted?

To an artist who is looking to practice art in today’s context, what do the perceptions, approaches and directions of the past have to offer? What is past in a continuous living present? To the aesthete, why should this conversation hold meaning?

As a species, how can we revisit the deepest reaches of our minds through the arts so intertwined with our emotional, social and ecological footprints?

From the relative safety of known perceptions, can we take giant leaps into the unknown, challenging our own consciousness in the process?

What is art? Who is the artist? And how can each one choreograph their own dance with space, line and form?

The abundant richness of possible questions is mindboggling. Each question has the potential to lead us on a new journey, teaching us to discard all that is unnecessary to reach a quintessential whole. From metaphysics to theoretical physics, from natural history to colonial history, from mathematics to quantum mechanics, from science to art, seamlessly one can wander and wonder and find a million paths to artistic process and creative expression. What is the limit? Where does the journey lead? And how can we craft our paths? Why should we embark upon it at all?

At these fascinating thresholds lie our own ruminations about art production, and being artists and aesthetes. The challenge of the book lies not so much in its answers, but in its complex richly textured questions. 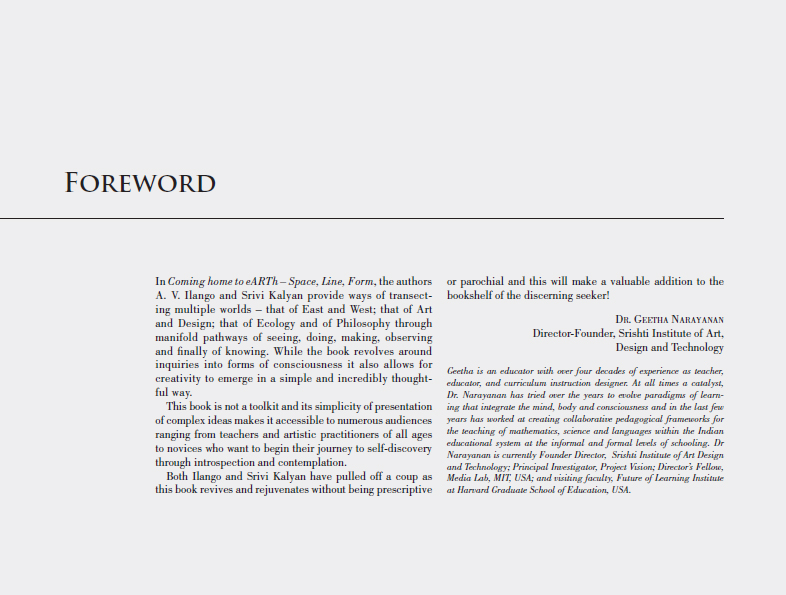 Geetha is an educator with over four decades of experience as a teacher, an educator, a curriculum and instruction designer. At all times a catalyst Dr. Narayanan has tried over the years to evolve paradigms of learning that integrate the mind, body and consciousness and in the last few years has worked at creating collaborative pedagogical frameworks for the teaching of mathematics, science and languages within the Indian educational system at the informal and formal levels of schooling.Dr Narayanan is currently Founder Director of Srishti Institute of Art Design & Technology; Principal Investigator of Project Vision, a Director’s Fellow at the Media Lab, MIT, USA and a visiting faculty at the Future of Learning Institute at Harvard Graduate School of Education USA.

Bookmark this page! We will continue to add interesting information about the book!